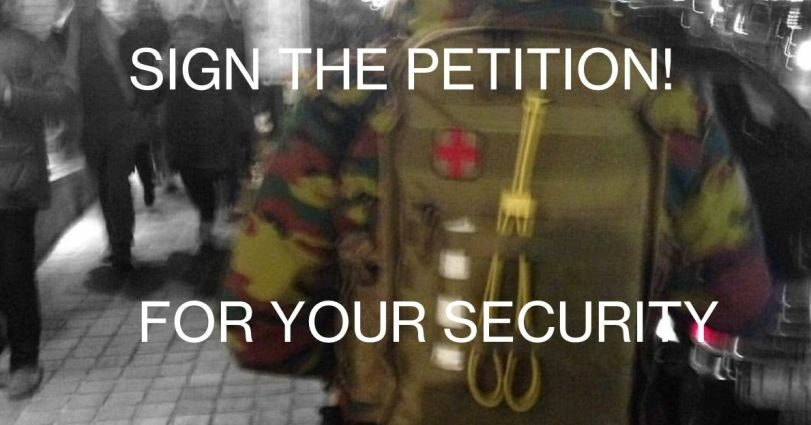 Short summary : YES, as a foreign national registered in Belgium you can sign this petition. You have a chip on the backside of your registration/identification card along with an issued PIN code. There is a registration process through CSAM + E-ID (if you have a smart card reader) whereby you could (or should) receive a registration confirmation email to activate and then you can sign the petition.

Unfortunately the federal parliament petitioning website is solely available in Dutch or in French.

The basic idea is that the political approach towards the budget of the Belgian Defence is changed from a requirement to find (political) motivation (and will) to increase spending to having to take into account increased spending (2% GDP) and having to properly explain why they want to invest less. Additionally it enables the Defence Direction Committee too intervene and directly request more budget to Parliament.  The idea is to spark more thought provoking political debates due to the reversed approach.

The link tot he petition is HERE in Dutch; HERE in French! I also made a 3 minute multilingual video showing and explaining the registration and signature process in order to sign the petition. A lot of problems arise because you have to validate the registration email before you can sign. Internet Explorer is not supported. In case you use a smartphone for the ItsMe procedure use the same browser window.

On 3 December 2020 the Belgian Chamber of Representatives launched a new digital Citizen Initiative (petitioning) platform through which Citizens can introduce requests to the Belgian Federal Parliament and request to be heard if the gather sufficient petition signatures. 25.000 signatures are required with a geographical spread between Belgian regions.

I introduced the first petition which was approved. Following some questions from Belgians abroad on their legitimacy to sign the petition it turns out that anyone registered (with an adress) in Belgium is eligible to sign the petition. Language laws however prohibit the publishment of the petition in other languages than Dutch, French or German.

The idea and concept behind this petition is obviously to be heard and create a legislative initiative whereby Belgian Defence is approached in a different way. Belgian Defence isnt really ‘sexy’ nor of high importance in Belgian politics, its one of the least appealing positions as a cabinet member (minister) and in the past 17 years the budget has been steadily declining when viewed in relation with our GDP. It seems like Belgian Defence is the last ‘budget position’ that needs to be filled and only gets allocated the budgettary leftovers.

That is why I would like to implement a different approach.  Instead of ‘searching’ and scraping any possible additional budget together for Belgian Defence or perhaps reducing the Defence budget I would like that the federal government is left with no choice but to calculate and project its  legislature  and annual budget whereby 2% GDP is reserved for military spending annually.

However, I would give the Belgian federal government room to spend less or definately allocate less than 2% GDP for military spending following a debate and vote in the Belgian federal parliament. There will be a requirement to publcily motivate why it is spending less than 2% GDP – thus also known to its allies. I am not pleading for a strict 2% GDP norm application because I want to prevent expenditure waste whereby public money is spent just to spend it. No, I want meaningful expenditure in a cost effective way. For instance, if Belgium can provide a similar military capacity using less than 2% GDP than allied countries who do spend 2% GDP , then it should be acceptable that Belgium does not spend the full 2% GDP. The remaining budget can then be allocated and re-used for other policy matters.

Last element of the concept is that the Defence Staff (the Direction Committee) has the right to introduce its own budget proposition (the annual budget and a tentative legislative budget covering the 5 government years) independently from the Belgian federal government and its own Minister of Defence. This has to enable the staff to request more budget directly – even if not supported by the government – or to allocate the budget differently. Obviously there will be parliamentary debate on the matter and there will be a motivation requirement. In principle I prefer that the Direction Committee and the Minister of Defence introduce a common budget proposition but if there is no compromise possible then open debate amongst 2 propositions should be possible. I want to prevent that a Chief of Defence has to plead (almost beg) for an addittional 2.4 billion € defence budget increase through the media as happened in the summer of 2019 – without being heard or receive any political attention.

The concept should lead to more political debate on defence matters and further clarify the responsability on policy decisions instead of all parties pointing fingers at each other when a wrong policy choice was made. By reversing the approach towards the budget  I hope it will become easier for Belgium to reach its 2% GDP goalline – which its not even set to reach by 2030 according to the latest budget planning. It should also enable the Belgian Defence to more easily react and take action towards emerging technologies and threats through easier budget allocation. I am also hoping that the noticeable pendulum swing in Belgian Defence politics comes to a stop: one government coalition invests in new equipment; the other government  coalition invests in personnel. I want to stop this ‘IF’ story and turn it into an ‘AND’ story whereby a government can and invests into equipment and personnel.

Since the NATO Defence Ministers Meeting in 2006 a 2% GDP Defence expenditure has been set as a norm amongst NATO allies, which was confirmed in 2014 as an outcome of the Summit of Wales. NATO members declared to spend 2% GDP in defence by 2024 or to evolve in that direction. Additionally the European Parliament approved a resolution calling EU member states to increase their defence expenditure to 2% GDP. We also have to remember that Article 24(7) of the Treaty on European Union is similar as article 5 of the NATO treaty and it also states ‘no to the prejudice the specific character of security and defence policy of certain Member States’ which to me is a refference to NATO Membership.

Subsequent Belgian federal governments have accepted the 2% GDP norm and like to declare to be a reliable and loyal partner in NATO or EU context. Belgium therefor has all the interest to try and reach the 2% GDP norm as best as possible and as soon as possible.

In 2016 a Strategic Vision for the Belgian Defence was written and published. The document contained a long term budget vision in terms of %GDP. By 2030 Belgium should reach 1.3% GDP in military expenditure; instead of 2% by 2024. Synically, according to the table we are ‘increasing towards the 2% GDP’.

The current Belgian Minister of Defence, Ludivine Dedonder, declared in her policy statement that by 2024 the current Belgian government is set to reach a 1.24% GDP expenditure. Which is more and faster than planned according to the 2016 Strategic vision. In the motivation or accountibility document for the 2021 budget it is stated our Defence budget would reach an average of 1.65% GDP by 2024 in comparison to allied states. It would seem 2% GDP should be reachable but the diversity in %GDP numbers is quite confusing and still not 2% GDP.

Financial means form a cornerstone for any public policy, even more so for Defence policy given that it is not a revenue generating activity. It is of the utmost importance that a sovereign country sufficiently invests in her armed forces as protecting its sovereignty, its citizens abroad and at home is a key task of any government. In the 21ste century national defence is internationalised by protecting the territorial integrity and sovereignty of allied countries; whether in NATO (Articles 4&5) or EU (article 42(7)TEU and Article 222 TFEU) context.

Times change. During the Cold War Belgium was a loyal and reliable partner doing its bit within the NATO coalition with a standing Corps in Germany. Since 1992 we’ve seen a steady reduction of the armed forces and with it its decline through subsequent reforms and budget cuts. The purpose of this petition is not to turn back time and return to a large armed force as before 1992. But the reality is that the ‘era of peace’ that some politicians claimed to have seen following the collapse of the Berlin Wall and the end of the Cold War is gone.

It has been disappearing since the 9/11 attacks and the Global War on Terror. The Saddam regime was overthrown, the Arab Spring set the remainder of the Middle East and parts of the Maghreb ablaze. Turkey is acting more and more as a independent assertive regional actor creating tensions with European countries and Russia.

The re-emergence of Russia as an assertive actor towards EU and NATO, their usage of cyberwarfare and many forms of political pressure up to  sustaining the déstabilisation of the Ukraine means that there is an urgent requirement to bolster the defences in the East. Not solely out of fear of a military escalation but also to calm down and bolster the trust of our Eastern European partners whilst making clear that Russian ambitions remain in check.

In the far east China is clearly modernising its military capacity at an accelerated pace, whilst applying increasing political pressure on Hong Kong, Taiwan and neighboring countries. Enhancing its hold on the South China Sea through fortified island building policy, increasing assertiveness in border disputes with neighboring countries like India. In this context it is imperative that European countries bolster their own military capacity so as to decrease its dependence on the United States of Amerca and also enable the US to bolster its military presence in the far east to keep China in check along with regional allies.

Within our own Belgian borders Belgian Defence has proven again and again its added value. It was the armed forces that had to secure sites and public area’s against possible terrorist attacks given that the police forces were unable to cope with the threat. It was Belgian Defence who had to launch and rush the acquisition of facial masks to help the population in the fight against COVID-19. Belgian Defence has been filling the gaps in the logistical chain (medical goods) and the medical chain (hospitals, medical evacuation, nursing homes) in the fight against COVID-19. It is the only government service that is able to evacuate citizens from abroad using its own airliner or in case of danger using its tactical transport aircraft. It was Belgian Defence who rushed to the aid of the population during the large scale flooding that Belgium had to undergo in its past. It has been a while but climate change could signal the return of this threat.

In short, Belgian Defence is your last line of reliance and defence. It is the sole government organisation to be able to rush in and provide emergency support when all others have been overwhelmed. Is it the only organisation that can protect the population against the upper spectrums of violence – albeit with the aid of allies. It is the key organisation that protects our way of life and freedoms.

It can only do so if it receives the adequate funding it requires in order the finances the means and required capacity to do what it can do best: helping the nation and aiding in maintaining international security. Luckily we have a norm fort hat: 2% GDP expenditure.

If you agree and you’ve read this article to these final lines : please sign the petition and spread the word.

Comments are closed, but trackbacks and pingbacks are open.