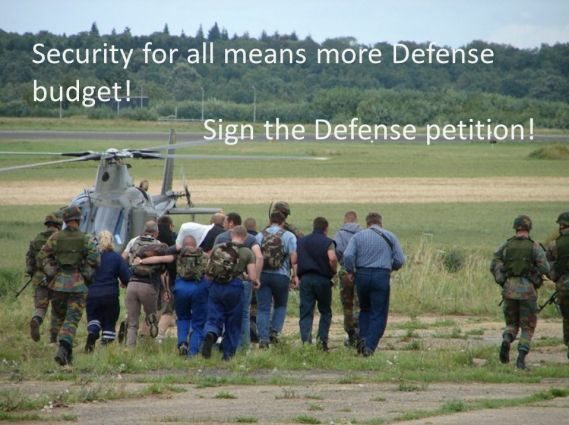 Currently the petition has passed the 10% threshold. We’re at 2.541 signatures of 25.000 required. Yes, you too as a foreign national living & registered in Belgium you can sign this petition! Your registration card has a E-ID type chip on the backside! (You do need a smartcard reader).

You can find the link to the (Belgian) Defense Petition here (in Dutch).

I’ve made a simple yet complete video on how to sign this petition.

The idea behind this Citizen Initiative is to inverse our politician’s approach towards the Defense budget.

If we take the 2% GDP norm as a reference then since the Summit fo Wales in 2014 (-2019) the Belgian government has underinvested a total of 24.6 billion €. According to the latest information Belgium’s Defence budget will reach a 1.3% GDP expenditure by 2030, despite having agreed to reach 2% by 2024.

It’s in the interest of our soldiers, police officer, anyone working in the security domain in Belgium ( or dependent there of) that we reach the 25.000 signature goal. The Belgian Federal Parliament has to take over the initiative and respond, aside listen to the petitioner if we reach this goal.

I am asking you to sign this petition and to propagate it. Yes, signing the petition is not easy. You have to register using the French or Dutch language website, treat the registration confirmation mail and then sign in again using E-ID to sign the petition. I have contact Parliament requesting to ease the signature procedure and make it more client friendly and be available in more languages (German and English).

I’ve made a simple yet complete video on how to sign this petition.

Bare in mind that your registration card has its E-ID chip on the backside when you introduce it into your smartcard reader. Do not use Microsoft Internet Explorer as it is no longer supported.